[The following post was published today on Open Democracy. It’s one of a number of open letters to the incoming BBC Director General, that have been published on their OurBeeb website.]

You’re a journalist; investigating the working conditions of the miners who are fuelling China’s industrial growth. You follow leads, conduct interviews in the polluted, devastated landscape of Shanxi, where workers are living in grim conditions, risking their lives for the production of products that we consume. This is the experience of Journey to the End of Coal, a fine example of a new breed of documentary projects – web-based, interactive – emerging in the last few years. It’s a big contemporary issue, approached in an accessible, vivid way – a classic public service offering. 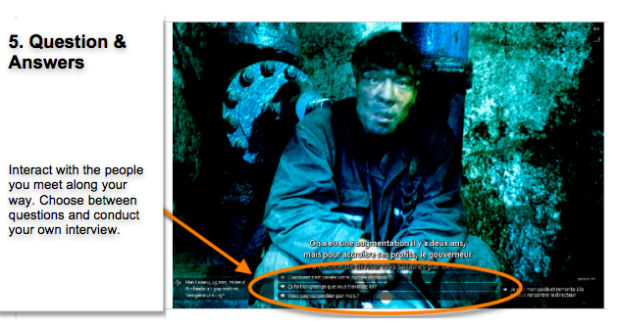 Immersive, participatory; digital platforms offer new opportunities to inform, educate and entertain. This is the BBC’s remit. Yet the BBC is not producing any of the recent documentary projects that take advantage of the interactive and exploratory potential of the web. Why not?

In the mid 2000s the BBC’s critics grew vocal, charging the Corporation with being too big and dominant on too many platforms. There were accusations that it was skewing the commercial market, and criticism of too much unfocussed investment online. The BBC came back with a new strategy. The BBC’s “unique selling point”, it was argued, were great programmes and news. Journalism would thus continue to have a big presence online. A few major TV brands – Human Planet, Doctor Who – would have significant interactive enhancements. BBC Radio too would have substantial web support.

Early BBC experiments in interaction and participation were abandoned. Interactive commissioners were gradually let go, and technology teams were consolidated in the Future Media & Technology Division, separate from editorial staff. On the positive side, that strategic and organisational refocus enabled the development of iPlayer. On the down side it relegated the emerging platforms to supporting roles and the BBC stopped learning about what their creative potential might be.

Since then, the BBC has pursued its focus on linear programmes. Meanwhile, in other major media organisations, production teams have been formed which draw together “old” media skills (video, storytelling) and “new” (experience design, interactivity), and a number of centres of excellence have been developing in the new arts of factual storytelling. Check out the interactive portfolio of the National Film Board of Canada – award winning projects like Highrise; a multi-year, global, participatory investigation into life in the most common form of housing on earth, the tower block, or Bear 71; an irresistible treatment of the deadly clash between humans and animals in the Banff National Park. Browse Arte TV, France’s interactive output. Explore Prison Valley, which uses a game-like approach to interrogate the US prison system, or Gaza/Sderot, a web doc through which the user is confronted with parallel lives in two villages within a few kilometers on either side of the Palestine/Israel border. These projects use compelling interactive formats to engage with pressing themes and questions.

You might say that the BBC already makes terrific documentary content; so why does this matter? There are a number of answers.  One of the BBC’s six public purposes requires that it take advantage of emerging technologies.  A BBC that doesn’t know how to deploy these new potentials risks becoming redundant to “the people formerly known as the audience” who take interactivity for granted. Looked at from a creative industries perspective, the BBC is the biggest UK commissioner and needs to be producing work in this emerging field – to develop skills and capacity in a sector that could be world-beating, as well as for the value that could offer its audience.

The BBC has been at the forefront of documentary innovation in the era of one-to-many media. With Charles Parker’s Radio Ballads in the 50s, Paul Watson’s The Family in the 70s, Video Diaries in the 90s, innovation delivered new shapes and types of programmes that showed us Britain and the world anew. There’s an opportunity now for a generation of BBC documentary that uses non-linear forms to throw light on the realities and challenges facing us now. Producing this work is part of the crucial project of re-inventing the BBC’s public service role in the participatory culture of the 21st century. I urge the incoming DG to support that development.

← UnionDocs Collaborative
You Tube & the Future of the Archive →