Just launched at Sundance, Bear 71 is a brilliant interactive documentary created by Jeremy Mendes and Leanne Allison with the NFB Digital Studio. It’s a haunting story told from the point-of-view of a female grizzly bear – Bear 71 – about humans and animals in the Banff National Park, and how animals are being devastated in that relationship. It’s about nature, technology, surveillance, and hubris. From the moment the worldweary voice-over started I was hooked.

“My own home range is around a town called Canmore. Now that town has doubled in size in the last decade. And it gets about five million tourists a year. Think of us as refugees, I guess… Thing is, you can take a grizzly out of the prairie but you can’t take the prairie out of the grizzly.”

The documentary draws on a wealth of photos and video from motion triggered cameras that Allison has gained access to – of bears, elks, foxes, tourists. It uses GPS data mapping. It cleverly mixes linear and non-linear experiences, with parts you have to watch, and time to explore, think and let the dreamy soundtrack wash over you. But listing the parts doesn’t do justice to the whole. It’s one of those pieces where the elements work just right, held together led by that terrific voice (Mia Kirshner),

“It was Bear 66 who taught me to stay away from the tracks…Because what’s the first law of survival? Don’t do what comes naturally. If you break that rule you become a statistic. Since 2000 17 grizzly bears have been killed on the Bow Valley due to railroad fatalities. …That’s one every five kilometres of track.”

The script, by award-winning Canadian journalist JB MacKinnon, is so good it would work as a short-story. Bear 71 is smart, funny, melancholy, an irrestistible narrator. The 20 minute film tells her story from capture and tagging to her death, pondering along the way, “where the wired world ends and the wild one begins.” 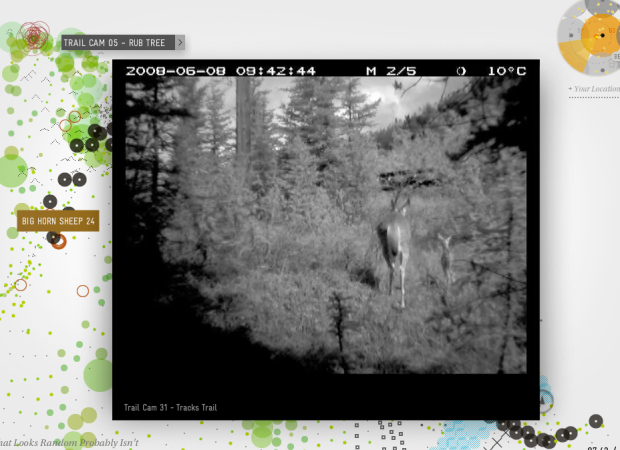 The navigation isn’t always 100% clear to start with, but that’s fine. I was a little lost, but comfortable mooching around, exploring all the feeds, watching the animals, who we discover are really the ones who have lost their bearings in a ‘wilderness’ that’s been overtaken by humans and their traces. You get drawn in, metaphorically, then literally, via your webcam. Human 111871, that’s me. Once in a while you spot a fellow human, another viewer. I tried waving, but they didn’t see me. We were watchers, and watched, not doers, in this scenario.

Having to find my way made me think of Peter Dukes recent article on the role of the user [I so hate this term but what else is there?] in interactive documentary. He quotes the artist filmmaker Ken Jacobs, writing about found footage, and his dislike of being told what to make of things, “Better to just be pointed to the territory, to put in time exploring, roughing it, on our own.” Bear 71 manages a nice balancing act between openness and direction. 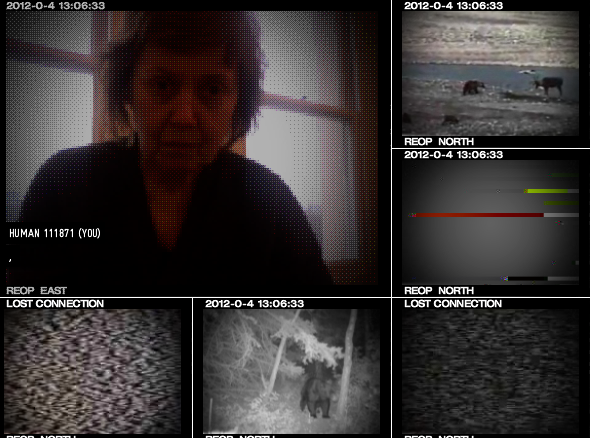 With its use of data and personalisation, the work pushes documentary boundaries in a number of directions. It also makes an interesting contribution to the genre of first-person [sic] documentary. Hovering close to fiction, the way the voice pulls you in recalls classic screen narrators – In a Lonely Place, the similarly post-deceased Kevin Spacey character in American Beauty, Blade Runner (sci-fi comes strongly to mind). It made me think about just what a powerful device voice can be in interactive documentary – addressing us in the intimate context of the personal screen.

For anyone at Sundance or in Utah in the next few months, there’s also an installation, made with Lance Weiler, at The Yard in Park City and at UMOCA (Utah Museum of Contemporary Art ) until April 19. Go if you can. I wish I could see that. Or check out the reactions on Twitter #bear71