An Evening at UnionDocs

It was good to revisit UnionDocs in Brooklyn, last Sunday, to take part in a panel on Global Perspectives in Digital Media . I was talking about Video Nation‘s work abroad during the 1990s, and the fruitful results which came from putting camcorders into the hands of participants, even briefly, or setting the camera up and inviting people to reflect on everyday life, as in this recording of a ferryman during the Bangladesh floods of 1998.

My co-panelists included producers Rahul V Chittella and Khairani Barokka (see Flickr stream below) from the remarkable collaborative documentary project, Global Lives (which I mentioned back in the Summer). Hearing them speak really brought home what a sign of the times that project is. Khairani explained how it all started in 2004 when David Evan Harris, now project director, was involved in making a film following a day in the life of a cable car driver in San Francisco. It gradually grew from there, until over six hundred volunteers – film-makers, photographers, translators, sub-titlers  – have now collectively produced 10 x 24 hour films following ten people – a representative sample of the global population – through one day. David Evan Harris talks through the project’s evolution in this TED video.

It would have been impossible to imagine creating and co-ordinating such a volunteer effort only a decade ago – without what Clay Shirky has called the “ridiculously easy group formation” made possible by social media and the expanding connectivity of the web. Global Lives is crowd-sourcing with a purpose, a community of volunteer producers with a common vision to redress a Western skew in representation, in particular a paucity of global coverage in the US.

There are extracts from Global Lives online, but the full work is an installation which needs a physical space. It’s been in shown in galleries, museums, schools and public spaces around the world. There’s an open archive too – with the footage available to anyone who wants to create their own show. According to Chittella and Khairani the ten films are just the beginning, and more will follow.

In the Q & A my friend Andrew Tyndall asked something that was on everyone’s mind about the twenty four hour idea; what happens when the subjects are sleeping? [surely that’s not great content?] Khairani explained how rather than being boring this was in fact a very revealing section of the day. The sleeping quarters and arrangements – alone, with others, quiet or noisy, interrupted or private –  all contribute vivid detail to the picture of each person’s circumstances and culture. It made sense of their approach, and I could imagine how in an installation these quiet phases of the recordings would play well alongside the busy-ness of the other subject’s day-times.

In the face of what Global Lives is doing it felt rather like missing the point when someone in the Q & A asked whether it was ethical for people to be producing content without being paid. Don’t get me wrong –  documentary is fraught with ethical questions, and, whether in conventional documentary or in participatory work, transparency about the terms is vital when media professionals engage with the public. (Though in the case of Global Lives many of the film-makers are professionals anyway, though doing this project for personal rather than financial reasons.) I don’t think there’s one answer on the payment front, but whether payment is available or not needs to be made clear right at the start so that people can make an informed decision.

But production technology is out there now. It’s becoming ever more accessible and affordable. People are going to do stuff with it – sometimes paid, sometimes not, sometimes co-ordinated by professionals, more often on their own terms. We’re looking at the emergence of a literacy in video which is analogous to written literacy, and an arena that – when cameras, tape and editing were expensive and scarce –  was wholly a professional one is just not any more. This disrupts business models, raises questions about how creativity gets rewarded, and confronts us with a new problem of digital exclusion – what Henry Jenkins call the “participation gap”. But it allows for more and different perspectives, and (as “Global Lives” does) provides opportunities to counter representation by ‘Big Media’, which has to be good. 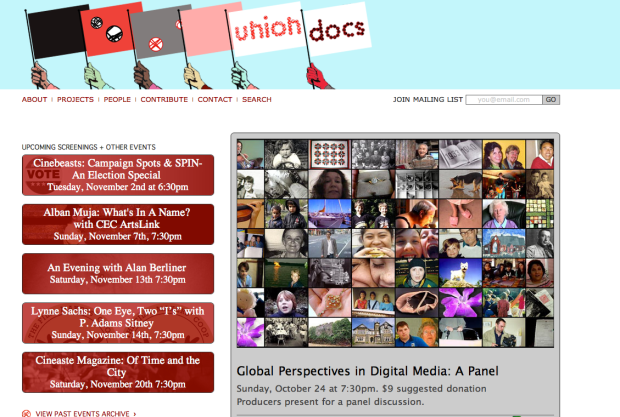 Before the evening panel I did a presentation for the UnionDocs Collaborative – a unique Masters-equivalent programme for early career media producers, theorists, and curators – now in its fourth year. As UnionDocs describe this independent educational initiative; “It is both a rigorous platform for exploring contemporary approaches to the documentary arts and a process for developing an innovative group project.” Last year’s group made work inspired by Roland Barthes ground-breaking collection of essays,”Mythologies”. This year they’re focussing on the Williamsburg neighbourhood where UnionDocs is located, and have just completed a fast turnaround remake of an archive documentary about the area. I sat in on a seminar and was interested to see the programme in action. They were knocking around issues of authenticity and performance in the director’s position in first-person documentary, having watched Sherman’s March. My memories of my media studies MA are hazy, but I don’t think there was the kind of open, inquiring, critical discussion that I saw here, grounded in Kara Oehler‘s extensive experience as a media practitioner. If you’re interested in documentary and looking for a Masters programme in the US I’d recommend you check it out.

One thought on “An Evening at UnionDocs”