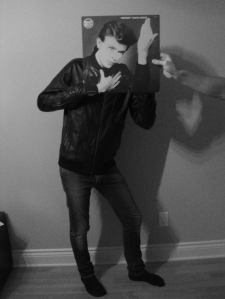 I was delighted to discover, over a coffee a while back with fellow South Walian resident Carl Morris, that he, with collaborator John Rostron, was behind the internet phenomenon Sleeveface.  If you’ve not come across it, this project, which has been going online since way back in 2007, involves, “one or more persons obscuring or augmenting any part of their body or bodies with record sleeve(s) causing an illusion”, a definition which in its dryness belies the playfulness of the whole Sleeveface thing. The how-to video by Ewan Jones Morris is a fine introduction. You can read the backstory and find links to lots of the coverage Sleeveface has had on the Wikipedia entry. (Carl’s been on breakfast TV!)

I defy you not to smile at Barbara Streisand, Edith Piaf or Bjork , or admire the cheek of Merle Haggard. David Bowie, the most ‘sleevefaced’ of artists with 24 entries on the website, put his finger on it, calling it, ” just the best sight gag in ages”. At the same time, the images are a kind of celebration of d-i-y creativity. You ponder how the maker settled on that particular mis-en-scene, wonder how many charity shop visits it took to source the right shirt, admire the way someone got the pose just so. Both in terms of participants and site visitors the project has been a major viral success and looks like it will run and run, with new pictures still being posted on the Flickr site ( over 3,600 to date), and Carl and John winning new fans through live events like a party last week at ROFLCon in Boston.

I asked Carl if he would take the time to fill out the CollabDocs questionaire and you can read his answers here. He makes it sound simple but don’t be fooled. Sleeveface is an exemplary participatory project and has been astutely managed. It’s all about community – from the friends in Cardiff who started making the images to the wider international community of ‘vinyl junkies’ who’ve picked up and run with it. It’s been an iterative process, developed in response to evident enthusiasm rather than dreamed up in a vacuum. And Carl and John were quick to spot the potential of particular social media platforms – Facebook, Flickr, Twitter  – to support it.

Sleeveface centres on a very engaging call to action which is simple enough to encourage anyone to have a go (providing they didn’t get rid of their vinyl years ago like me.) It’s fun, and the bit of competitiveness Carl mentions probably works well to up the creative ante among the hardcore Sleevefacers. The project also has integrity – as Carl puts it, “You need to choose something you’re enthusiastic about…You probably need to be the most dedicated person in the network. Even if you haven’t met your collaborators offline, this will shine forth.” 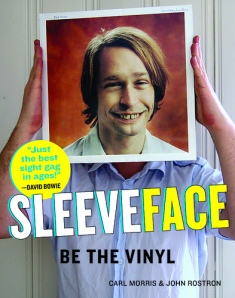 Most people are highly selective about what they’ll commit their time and creative energy to. Sleeveface rewards that commitment. As well as the fun to be had in making an image, you get to see it take its place in the Flickr gallery. If you are lucky it might be selected for the Sleeveface website. And in taking part you’re building the treasure trove of gags, as well as a collective celebration of vinyl and music culture. What’s not to like?